I sang the National Anthem and felt real.

At the beginning of this past week, on Feb 28, we paused at 1pm and sang all three verses of the National Anthem. I was one of the 9 people who worked to bring people together. It was great. I’ve had to take a week to write this, because the words wouldn’t come.

IT HAPPENED! See the vid | See the pics

So why did I sing and persuade others to sing the National Anthem?

On March 1, (the very next day) my iPhone was stolen, snatched from inside the cab that was taking me to my office by a young man who ran away daintily across traffic and disappeared into a low income neighbourhood. Upset though I was, I didn’t run after him. Instead I turned to my blackberry and as the cab sped away from the scene, I ‘twitted’ it and ‘facebooked’ it.

All these are decidedly middle class experiences, aren’t they?

Maybe that’s why I did it. Because I am middle class. And I need to get involved, somehow.

Over Java coffee and Dorman’s milkshakes, from the comfort of the malls, or at home while flicking DSTV channels and fiddling with the internet from my smartphone and laptop, with friends who do the same, I am privileged to pontificate about what is wrong with this country – point the finger at the government and disdainfully wonder how in a country, where iPhones and Billions of “my” tax payer money alike are stolen with impunity, where a number of cabinet ministers are ambassadors to try and circumvent justice for the post election violence, and others blithely conduct a roaring drug trade…  I Disdainfully wonder how I should consider singing the national anthem with pride – and then take a sip of my Mocha.

Poor people, like my uncle Awadh don’t drink Mocha. And they don’t pontificate about being Kenyan – they  simply can’t afford to. I am privileged and I must sing that national anthem and reflect on the line “raha tupate na ustawi” (“plenty be found within our borders”)

But lets pontificate a little. There sometimes seems to be little to be proud of  in this country. Scholar, Wambui Mwangi says it even better than I do:

“I am not sure that we have much to be proud of in these parlous times.

“Six of our leading representatives and public figures are under grave suspicion by the International Criminal Court of crimes against humanity, but this apparently does not perturb us.  Our internally displaced citizens continue to languish in refugee camps, which disturbs our comfort not at all.  Millions of young people are unemployed and frustrated but we would rather not discuss it.  Ethnic militias gather force and virulence: still, we are content.  A vulgar misogyny accompanied by a homophobia as vile as it is pervasive finds extensive purchase in our collective psyche: we are unflappable.  We seem to enjoy all these, or at least not to mind them enough to engage with their implications.
We are enjoined to choose peace over justice. Nobody blinks. No thunderbolts fall from the sky.”

In her observations above, she speaks for me too. There’s little to be proud of. If this was the whole story. And it isn’t the whole Kenyan story. Some important positives have happened and while I demand justice for wrongs done (and maybe I should be less populist and demand for justice to be done for the last 30 years’ worth of wrongs at least), I would be remiss if the positives did not make me proud. Kenya has become that country that everyone can say and think what they please  about anyone and anything (lots of Kenyans died and were tortured and lost everything for this right). Kenya has somehow – in a canternkerous, topsy-turvy, bendy way – finally come up with a new constitution and a lot of effort has gone into getting that to happen – and a lot more is going on within the country to make things better. It is true tribalism and corruption does weigh heavily on us. It is also true that there are efforts all over the country – many taken by non politicians to bring people together.

By the way, speaking of this thing called pride: Wambui says, “‘Pride’ is an uneasy hook for our national sentiment because it seems to demand that we forget issues that we urgently need to remember and to question.” I am careful to talk back at Wambui Mwangi because she is among the smartest people I know, but here I think she has misrepresented what “pride” in this context would be. A mother is proud at her son’s football game of her son, despite the fact that his grades have been failing and she caught him trying out recreational pharmaceuticals, is she not? So is pride in Kenya in my view. It occurs, even as we question what we urgently need to remember and question.

Maybe I sang and called on others to sing because I see more that binds us than that tears us asunder.

Maybe I did it because it is an important national symbol and this country may have gone to the dogs because we don’t focus hard enough on our national symbols. 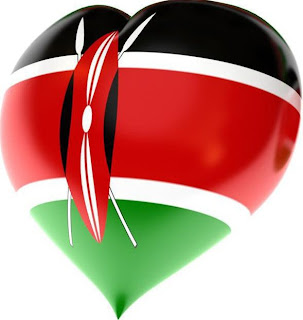 James Shikwati, in a critique of the initiative, tells this anecdote: “I had been in a forum where the chair could not get us to sing the country’s national anthem. “National anthem for whose country?” we asked.” Gasp. Isn’t it true that when you forget your soul,nothing can make you what you want to be? As a country, we lost our soul when we lost touch with the bricks that made us a nation – mostly because of the futility of current affairs. The national anthem is not invalidated by the fact that individuals piss at its essence. The flag is not any less important or any less the sign of our nationhood, because there are people who use it as a means to get by traffic. I agree with James. A lot of work still needs to be done to make this country better – and I say that it should be done as we sing the national anthem, NOT INSTEAD OF singing.

Shikwati ends his critique by saying, “The middle class should get to work and help to dismantle the infrastructure holding people back from being citizens of this country.” Er… it must be noted that the middle cass is very busy – thats why the economy is leaping and bounding (however wobblingly) again. But someone needs to remind us, the middle class what we should be working so damn hard for – in addition to our mochas and glib attitudes. The national anthem if reflected upon, may do this.

And it did for some: Where’s my pillow, Mark Kaigwa, Viola’s iris and for many others… just Google it.

I sang the National Anthem, and in doing so, I felt liberated.  As I sang these words, I understood in a very personal way, that it isn’t about the politicians. It starts here, with me, now. So why do a pointless thing as sing? Because as the roman historian, Gaius Sallustius Crispus (Sallust) said: “It is sweet to serve one’s country by deeds, and it is not absurd to serve her by words.”

At the end of the day, I still believe in Kenya and there is something Kenyan worth fighting for Damn it! or like Mr. Grimwig in Dicken’s Oliver Twist, “I will eat my head!”

Thank you very much for the mention, Al. And your insights on the attitude we ought to have as the privileged middle. Check my update to this post, where I describe what the process and aftermath of that sporadic public rendition of the anthem was.

Musings of a sheltered middle, nay so middle class existence u want change? Tell the so called middle class to run for office and stop imagining that singing the anthem in the middle of a working day will change the course of this country.,the uhuru,ruto.,and raila insidious poisonus campaigns are run by men and women like us. U want change stop tweeting and facebook and embrace your neighbour business associate regardless of tribe,this so fancy musings are a flight of fantasy. Kenya is not nairobi. Please ensure your fancy toys.so that when some1 risks life and limb u dont chase after him and get him killed. True nationhood is not a fad or a lifestlye,its being one pple

Thanks for the mention as well. It's clocking a month since the KenyaFeb28 fete, looks like it was ages ago.

As always sir, great read !!! But for some reason, I feel as though you are trying to convince yourself here as much as your trying to convince me… It seems to me that deep down you know the HARD fact; that there will be less and less to be proud of until the busy middle class gets organised, runs for office & gets busy in office !!! BTW , I sang here in the UK & was inspired to do something more than sing !